The Communist Party of China (CPC) on Sunday unveiled its blueprint for building a modern socialist China in all respects for the next five years and beyond as the 20th CPC National Congress opened.

The five-yearly meeting is the first national congress of the CPC after its centenary in 2021, when the Party led the Chinese people to finish building a moderately prosperous society in all respects.

"From this day forward, the central task of the CPC will be to lead the Chinese people of all ethnic groups in a concerted effort to realize the Second Centenary Goal of building China into a great modern socialist country in all respects and to advance the rejuvenation of the Chinese nation on all fronts through a Chinese path to modernization," Xi Jinping said in a report at the opening session of the congress.

He urged all CPC members to never forget the original aspiration and founding mission and to have the courage and ability to carry on the fight. 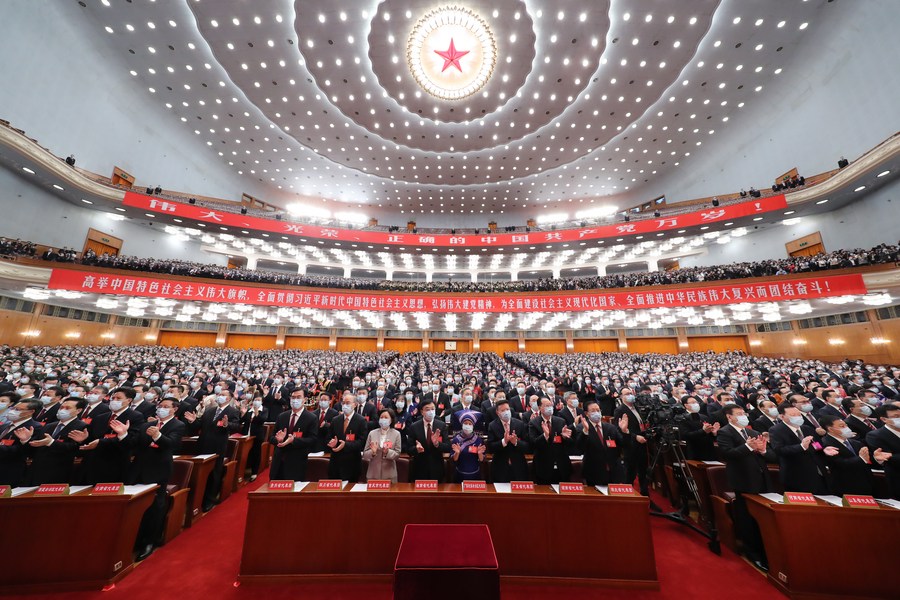 The 20th National Congress of the Communist Party of China (CPC) opens at the Great Hall of the People in Beijing, capital of China, Oct. 16, 2022. (Xinhua/Yao Dawei)

The CPC embraced its centenary, ushered in a new era of socialism with Chinese characteristics, and eradicated absolute poverty and finished building a moderately prosperous society in all respects, thus completing the First Centenary Goal, he said, calling the three major events "historic feats."

China's GDP has come to account for 18.5 percent of the world economy, up 7.2 percentage points over the past 10 years. The world's second largest economy has become a major trading partner for over 140 countries and regions, leading the world in total volume of trade in goods.

China has also joined the ranks of the world's innovators with breakthroughs in some core technologies in key fields. With its people-centered philosophy of development, the country has built the largest education, social security, and health care systems around the globe.

As a collaborative endeavor, the Belt and Road Initiative has been welcomed by the international community both as a public good and a cooperation platform.

Other great achievements highlighted by Xi range from comprehensively deepening reform to advancing the critical battle against pollution.

While fully affirming the Party's remarkable achievements, Xi also urged all CPC members not to lose sight of the shortcomings, difficulties and problems, such as bottlenecks hindering high-quality development and wide gaps in development and income distribution between urban and rural areas and between regions. 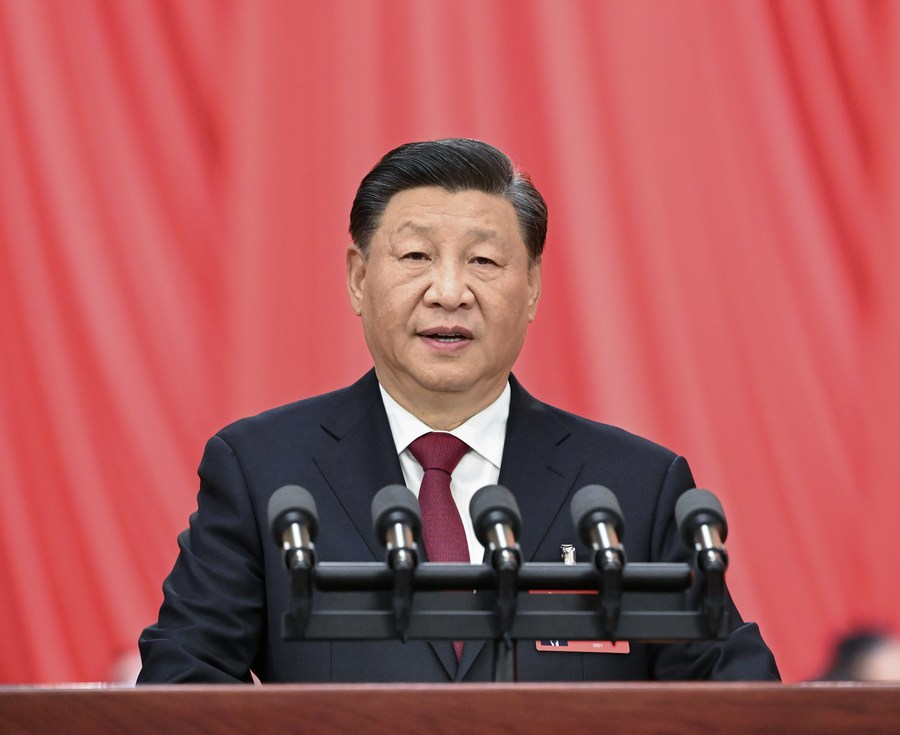 Xi Jinping delivers a report to the 20th National Congress of the Communist Party of China (CPC) on behalf of the 19th CPC Central Committee at the Great Hall of the People in Beijing, capital of China, Oct. 16, 2022. (Xinhua/Rao Aimin)

The world's most populous country is walking on a model of modernization that has not been seen before.

Chinese modernization is the modernization of a huge population, of common prosperity for all, of material and cultural-ethical advancement, of harmony between humanity and nature and of peaceful development, he stressed, adding that it offers humanity "a new choice" for achieving modernization.

In its two-step strategic plan, the CPC aims to basically realize socialist modernization from 2020 through 2035 and build China into a great modern socialist country that is prosperous, strong, democratic, culturally advanced, harmonious, and beautiful from 2035 through the middle of this century.

Xi expounded on China's overall development objectives for the year 2035, which include substantially growing the per capita GDP to be on par with that of a mid-level developed country, significantly enhancing national soft power, steadily lowering carbon emissions after reaching a peak as well as comprehensively strengthening the national security system and capabilities.

He also stressed tasks and targets in China's ambitious modernization drive, such as building a high-standard socialist market economy, advancing whole-process people's democracy, implementing the employment-first strategy as well as exercising law-based governance on all fronts.

"The next five years will be crucial for getting our efforts to build a modern socialist country in all respects off to a good start," Xi said.

Sean Slattery, one of the foreign experts invited to translate the heavy-weight report, said that to achieve modernization for the 1.4 billion people is a huge step forward for humanity.

"China is underscoring the importance of every country pursuing modernization through a path that suits to their own conditions and that their people would accept and support," he said. 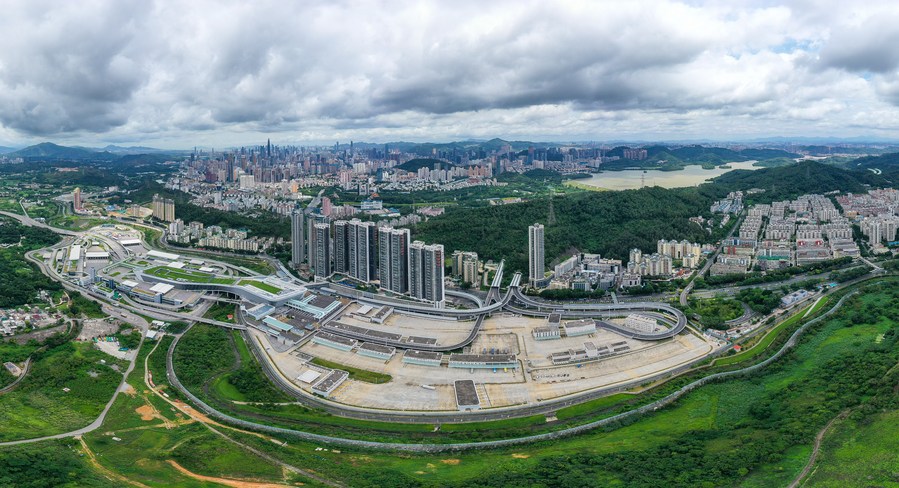 BACKBONE OF NATION, ANCHOR OF STABILITY

China has entered a period of development in which strategic opportunities, risks, and challenges are concurrent and uncertainties and unforeseen factors are rising, Xi told the 2,340 delegates and special delegates at attendance representing over 96 million CPC members.

Warning of various "black swan" and "gray rhino" events that may occur at any time, Xi, in the report, urged the CPC to be ready to "withstand high winds, choppy waters, and even dangerous storms."

He called on the Party, which he said has always remained the "backbone" of the nation, to always stay alert and bear in mind that self-reform is "a journey to which there is no end."

Describing corruption as "a cancer to the vitality and ability of the Party," Xi called for winning the tough and protracted battle against it.

Xi underscored that Marxism is the fundamental guiding ideology upon which the CPC and China are founded and thrive.

"Our experience has taught us that, at the fundamental level, we owe the success of our Party and socialism with Chinese characteristics to the fact that Marxism works, particularly when it is adapted to the Chinese context and the needs of our times," he said.

In a world that "has once again reached a crossroads in history," Xi reiterated China's commitment to promoting common development and a human community with a shared future.

"Only when all countries pursue the cause of common good, live in harmony, and engage in cooperation for mutual benefit will there be sustained prosperity and guaranteed security," according to the report.

China adheres to the right course of economic globalization and opposes all forms of unilateralism, it added.

China stands firmly against all forms of hegemonism and power politics, the Cold War mentality, interference in other countries' internal affairs, and double standards, Xi said.

"No matter what stage of development it reaches, China will never seek hegemony or engage in expansionism," he said.