The Law of the People's Republic of China on Safeguarding National Security in the Hong Kong Special Administrative Region (HKSAR) took effect at 11:00 p.m. local time on Tuesday.

The promulgation of the law was signed by HKSAR Chief Executive Carrie Lam and published in the Gazette, according to a statement of the HKSAR government.

The law was formulated according to the Constitution, the Basic Law and an NPC decision on establishing and improving the legal system and enforcement mechanisms for the HKSAR to safeguard national security.

The spokesman said the law only targets an extremely small group of offenders while the life and property as well as various legitimate basic rights and freedoms enjoyed by the overwhelming majority of Hong Kong residents will be protected.

There is nothing for Hong Kong residents to worry about in exercising these legitimate rights, the spokesman said.

In order to effectively discharge their duties, the police and the Department of Justice of the HKSAR government have earlier made preparations for the establishment of dedicated units, the spokesman said, adding that the police will establish a dedicated National Security Department on July 1 to handle the relevant work.

The Committee for Safeguarding National Security of the HKSAR chaired by the Chief Executive will be set up as soon as possible to take up the major responsibility of safeguarding national security in the HKSAR, the spokesman said. 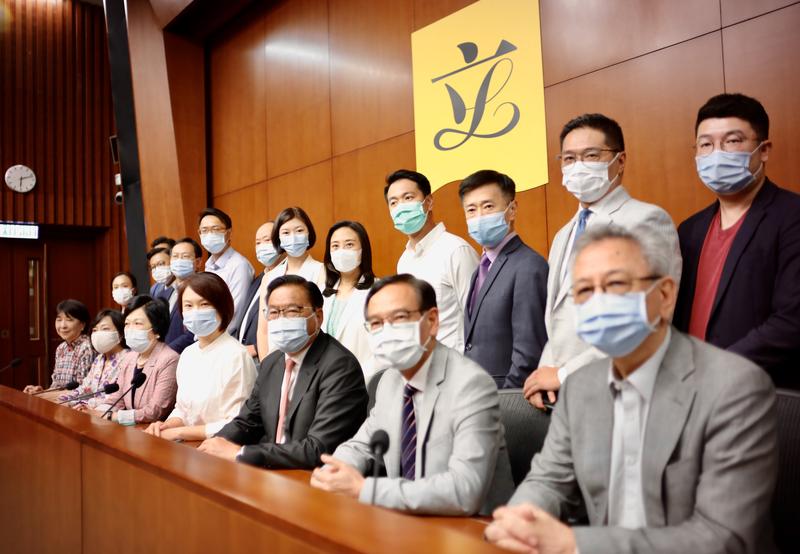 Lawmakers hold a press conference on Tuesday at the Legislative Council Complex and express their support for the Law of the People's Republic of China on Safeguarding National Security in the Hong Kong Special Administrative Region that was passed by the Standing Committee of the National People's Congress. (PHOTO/CHINA DAILY)

Various sectors of the Hong Kong community hailed on Tuesday the passage of a new law to safeguard national security in Hong Kong, saying the law is in the interest of local people and long-term development of the city.

Hong Kong lawmakers, political groups, police associations, leading business organizations and a college alliance were among those who made such remarks after the law was passed unanimously by the National People's Congress Standing Committee on Tuesday morning.

In a joint statement issued by 41 Hong Kong lawmakers in support of the new legislation, the legislators said the law will close the legal loophole in Hong Kong's ability to protect national security, restore the city's prosperity and stability, and safeguard the well-being of local residents.

In expressing its "full support", the Democratic Alliance for the Betterment and Progress of Hong Kong, the largest party in the city's Legislative Council, said the newly passed law closes a loophole that was being exploited by the opposition, and the separatist and Western anti-China forces during the yearlong social unrest to undermine the city's rule of law, economy, and people's livelihoods.

Joining the chorus of endorsements was the city's largest labor union, the Hong Kong Federation of Trade Unions, which strongly urged speedy implementation of the newly passed national security law.

The passage of the law was "a unanimous expectation of people" who have been adversely affected by the unrest, the union said.

A Hong Kong deputy to the NPC, Pauline Ngan Po-ling, who sat in at the NPCSC meeting in Beijing, was glad to see the central authorities have taken into consideration the concerns of Hong Kong people, including the issue of retroactivity, while drafting the law.

Another NPC deputy, Stanley Ng Chau-pei, who also attended the meeting in Beijing, said the law has acted as a deterrent as a number of separatist figures and political groups hastily "announced their withdrawal from politics" or dissolved their respective political parties.

The Hong Kong General Chamber of Small and Medium Business said in a statement that the implementation of the national security law will provide protection for the vast majority of the public, including owners of the city's small and midium-sized enterprises.

In addition, under the guarantee of the law, more policies related to national economic security can be implemented in Hong Kong, which will benefit Hong Kong-based SMEs, it said.

Dennis Ng Wang-pun, president of the Chinese Manufacturers' Association of Hong Kong, said he believes that Hong Kong will remain a free, open, law-abiding, and inclusive international city with the implementation of the national security law.

The Hong Kong University Education Alumni Association said in a statement the law will protect the majority of Hong Kong people who abide by the law and reinforce Hong Kong's core competitiveness as an international financial and business hub.

Chen Qingquan, an academician at the Chinese Academy of Engineering and a professor at the University of Hong Kong, said the law will help bring a focused campus environment, which is conducive to cultivating talent. The law will ultimately help Hong Kong become a competitive technology and innovation center, Chen said.

English translation of the Law of the People's Republic of China on Safeguarding National Security in the Hong Kong Special Administrative Region.doc