CCTV Gala to use HZM Bridge as Greater Bay platform

The Guangdong-Hong Kong-Macao Greater Bay Area has been chosen as a sub-venue of the 2020 Spring Festival Gala along with Zhengzhou of Henan Province, announced China Central Television (CCTV) on Jan 14.

The Jan 24 New Year's Eve event will, for the first time, be staged at the Hong Kong-Zhuhai-Macao Bridge (HZMB) White Dolphin Island (western artificial island) about 1.8 km (1.1 miles) from west Lingding Channel and 25 km (15 miles) from HZMB Zhuhai Port. The performances will rely on hi-tech means in the context of the island's features and surroundings, according to Zhang Min, chief director of the Greater Bay Area parallel session. 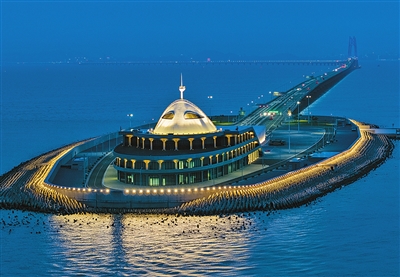 One of the first special economic zones, Zhuhai has made noteworthy achievements in high-quality development, livability, and ecological civilization, which is why it was chosen as a sub-venue for the second year in a row, said Lin Yuan, head of the Second Director Office of CCTV's Large Program Center.

In addition to the magnitude of the man-made marvels, the humanistic spirits, cultural characteristics, development achievements, and future prospects of the Greater Bay Area will be showcased to Chinese people around the globe.

The HZMB is a national mega project, and the Greater Bay Area is a national strategy. The parallel session will spotlight Guangdong, Hong Kong, and Macao’s joint effort to build the Bay Area into a world-class city cluster.

Since its debut in 1983, the four-hour CCTV evening gala has been the country's annual way to celebrate on Chinese New Year's Eve and is considered the world's most-watched television program. The variety show is an eclectic extravaganza of musicals, dances, dramas, and comedies by Chinese household names.

The gala includes people from all across the country by setting up multiple sub-venues in addition to the main stage in Beijing.